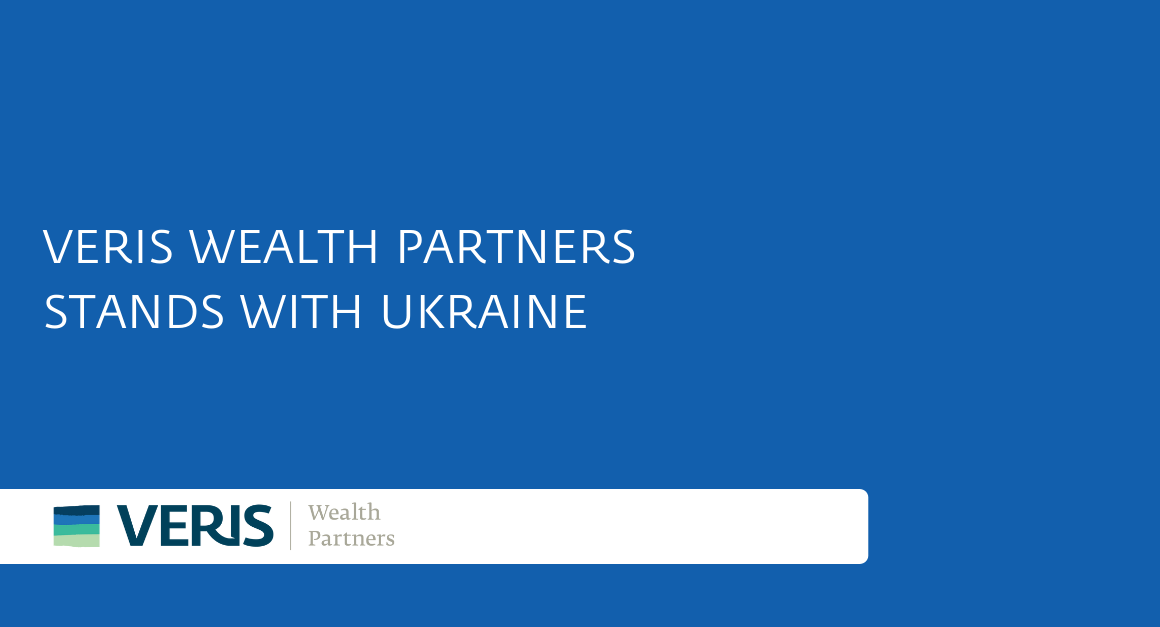 Veris Wealth Partners stands in solidarity with the people of Ukraine. We condemn Russia’s unprovoked attack on Ukraine’s sovereign soil and our hearts grieve for the people who are now suffering incredible losses in this unjust war.

Cities and towns, including civilian neighborhoods, schools and hospitals, have been reduced to rubble across Ukraine and the humanitarian crisis continues to grow. As of this moment, the UN estimates that over two million Ukrainian refugees have fled their homeland. We have been inspired by the incredible bravery and resilience the Ukrainian people have shown in the face of this tragedy. We also applaud the Russian civilians who have risked their freedom by protesting against this war.

This is not only a time that calls for grieving – it is a time that calls for action. As a community of impact investors, we seek innovative ways to use our resources to help solve humanity’s greatest challenges and build a better world. Since this crisis began, Veris has been seeking action steps we can take to help make a positive impact and provide assistance to the people of Ukraine.

Veris began to assess our investments in Russia shortly after the invasion began. At the end of February we learned that our exposure to Russia in client portfolios – through approved mutual funds and separately managed accounts – was limited to four stocks for a total value of approximately $57,000, which represented around 0.003% of our overall AUM. We immediately engaged with our fund managers to divest from these stocks.

Since our move to divest from Russia, one manager has been able to sell one of the positions but market closures, a lack of trading partners and settlement concerns have prevented the sale and valuation of other positions. We are currently awaiting updates from our fund managers on the remaining positions.

We also asked one of the fund managers to reassess their ESG process to ensure better identification of risk factors and limit future exposure. Furthermore, we asked all our approved managers to analyze and assess portfolio companies that will be negatively impacted based on revenues generated from Russia or significantly rely on suppliers based in Russia and we are currently aware of very limited exposure.

We are going a step further and also engaging with our approved fund managers to divest from Russian stocks and bonds if they have exposure in funds that are not approved at Veris. A few of our approved fund managers have already suspended purchases of Russian securities and are actively working to further reduce their exposure to Russia in funds that are not approved at Veris and where we have no investments. Various index providers like MSCI, FTSE Russell, S&P Dow Jones Indices, Bloomberg, etc. have announced that they will remove Russian securities from their indexes and have determined that Russian securities are no longer investable.

Veris made a significant donation to UNICEF to support a humanitarian project focused on helping the civilian population that is under attack in eastern Ukraine. UNICEF’s emergency response teams and partners are ramping up efforts to deliver safe water to families in communities where water systems are barely functioning.

UNICEF is also providing health care, nutrition and education support where services are severely lacking or have shut down entirely. Children are particularly vulnerable in this crisis and UNICEF teams are working to protect Ukrainian children from violence, exploitation and abuse.

You can learn more about the project and donate to UNICEF’s efforts to protect children and families in Ukraine here.

How You Can Help

If you are looking for ways to support other aid efforts, there are a variety of organizations working to help Ukraine’s civilian population and refugees. Here are a few that are providing essential emergency services on the ground in the region.

All of us at Veris will continue to keep the Ukrainian people in our thoughts. We will continue to seek out meaningful actions we can take to be of service and we will keep you updated on our efforts.

The information contained herein is provided for informational purposes only. While we have made suggestions as to various organizations that are providing support to the Ukranian people, we have not conducted a comprehensive review of such organizations and make no guarantees as to the claims that they make about their programs.