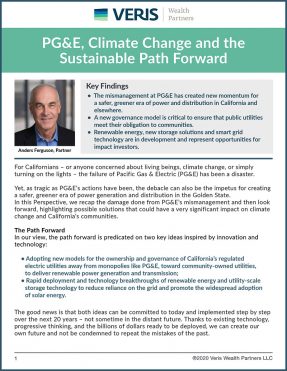 The failure of Pacific Gas & Electric (PG&E) to provide power safely to Northern California has been a human and economic nightmare, while highlighting the ineffective regulatory oversight of the investor-owned utility.

But as tragic as this has been, the fallout has created new momentum for a safer, greener era of power generation and distribution in the Golden State and potentially elsewhere.

In our view, the path forward is predicated on two key ideas inspired by innovation and technology:

The good news is that both ideas can be committed to today. They can be implemented step by step over the next 20 years – not sometime in the distant future. Thanks to progressive thinking and the billions of private and public dollars ready to be deployed, we can create our own future and not be condemned to repeat the mistakes of the past.

For impact investors, there will be new opportunities to put capital to work in solutions that will re-engineer the paradigm that has defined energy production and distribution for more than a century.