The surprise outcome of the Brexit vote was one of the second quarter’s biggest events. Citizens of the U.K. voted to leave the economic and political partnership of the European Union, roiling world markets and sending the British pound to 30 year lows. But the sharp and immediate negative market reaction quickly dissipated. If we consider an investment of $100 the day before the vote, we see that in almost all broad markets, the quick and early losses were largely recovered. This serves as a reminder to use caution when tempted to react to market volatility. Absent sustained market impact, we continue to focus on the long term social and environmental implications of the vote as well as the upcoming election in the United States.

Value of $100 invested the day before the Brexit vote

This burst of volatility in late June had little impact on the total quarterly returns for most segments of the stock market. The S&P 500 (U.S. large cap) markets dropped over 5 percent immediately following the vote but finished the quarter up 2.5 percent. For the first half of the year, the large cap market is up 3.8 percent. The Russell 2000 index (small cap) was up 3.8 percent in the quarter, 2.2 percent for the year. Developed international markets dropped almost 10 percent in the aftermath of the Brexit vote and recovered only half of that before the end of the quarter. The MSCI EAFE (developed markets) fell a total of 1.2 percent for the quarter and is down 4 percent year to date.  MSCI Emerging Markets had less of a jolt from the vote and ended the quarter up 0.8 percent for the quarter, up 6.6 percent year to date. 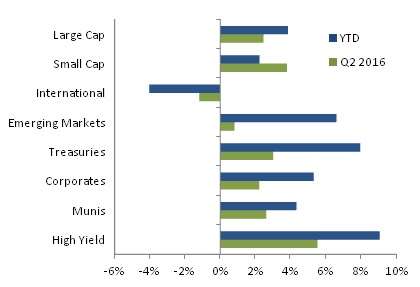 Domestic fixed income markets benefited from the flight to safety often associated with global economic uncertainty. The yield on the 10 year Treasury dropped to 1.48 percent. This added 3 percent to the total return of Treasuries in the second quarter bringing their year to date total return to 7.95 percent.  Other investment grade bonds were up year to date and in the quarter, but did not have the scale of benefit from the “flight to quality” of Treasuries. Corporate bonds were up 2.2 percent for the quarter, 5.3 percent year to date. Municipals were up 2.6 percent in the quarter, 4.3 percent year to date. High yield was the best performer of the major indexes, up 5.5 percent for the quarter and 9.1 percent so far this year.

Return for the quarter and year to date has been strongest in the sectors sometimes thought of as late-cycle sectors. The rebound in oil prices that began in January continued through much of the quarter. This contributed to the energy sector being the best performing sector in the quarter. Strong returns also came from Telecom, Utilities, Consumer Staples and Materials. However, Health Care, Industrials, Financials, Consumer Discretionary and Technology have had weaker results in the quarter and year to date. With Technology and Financials being the two largest sectors in the market, making up over a third of the S&P 500, their negative performance so far has considerably constrained the total market return. 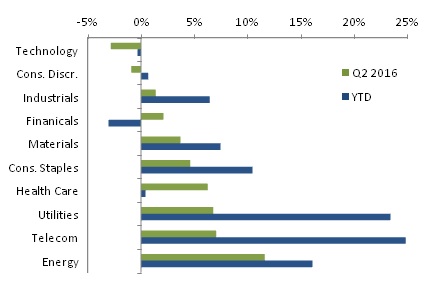 The seemingly fleeting market impact of the Brexit vote does not make it a non-event. The U.K.’s departure from the European Union has repercussions beyond short-term investment returns. As trade dependencies between the U.K. and the E.U. will likely lead to relatively favorable trade policies negotiated over the months and years to come, the vote represents a significant symbolic blow to the ideals of the Union. The broader impact of the European Union was demonstrated by the 2012 receipt of the Nobel Peace Prize in recognition of “over six decades of contributions to the advancement of peace and reconciliation, democracy and human rights in Europe.”[1] Polling suggests the vote to exit was largely motivated by a perceived ability to better constrain immigration into the U.K. when independent of the union’s humanitarian guiding principles. Significant populations of voters were motivated to vote based on this platform of fear.

With upcoming elections in the United States, France, and Germany, the tone, composition and results of this election have greater implications. In the face of increasing income inequality, we have seen a growing appetite for campaigns emphasizing anti-immigrant and anti-government rhetoric. We see this in the rise to power of Theresa May in the U.K., the popularity of Marine Le Pen in France, and Donald Trump’s status as the Republican nominee for president in the United States.

Violent Crime Trends in the U.S. 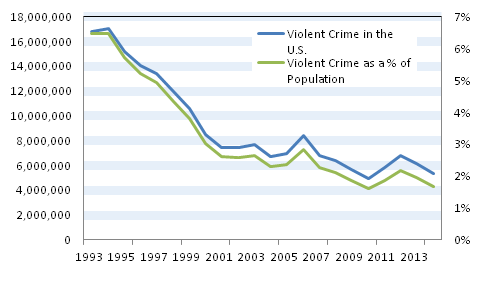 In 1980 CNN was founded as the first 24-hour news station. Today, dozens of channels recruit viewers to 24-hours of news. Through this time “news” has become a commodity through which stations sell advertising by recruiting viewers. News outlets may sprinkle stories about panda bears playing with their babies, but the primary tease and consistent voice lures viewers with fear. Across borders, politicians follow this trend as they seek to inspire followers by exploiting their deepest anxieties. Xenophobic, anti-immigrant platforms capitalize on this culture of fear despite significant statistical declines in crime. This tactic is the opposite of Franklin D. Roosevelt’s approach when he famously declared in his inaugural address, “The only thing we have to fear is fear itself.”

In the context of this climate of fear, we are grateful for the choices our clients have made to design their investment portfolios in line with a better future. While most of our portfolios exclude segments of the economy or particular companies that we and our clients think contribute to harm, much of our client assets are also invested in solutions. Our clients invest in companies that recognize that welcoming a diversity of employees and paying them a fair wage attracts and retains the best talent. Our clients invest in companies developing and advancing technologies that mitigate climate change, conserve resources, and reduce waste. Our clients invest in loan funds that are advancing affordable housing, expanding job opportunities in under-served areas, and improving access to health care. It is our distinct honor, amidst the chaos and fear, to engage in this work.