Equity market returns in the first quarter were very strong. Investors were seemingly unfazed as political commentators vacillated between exuberance and doubt over the potential for the Trump presidency to advance tax cuts and other pro-business policies. The S&P 500 (U.S. large cap) was up 6.1 percent. The Russell 2000 (small cap) was positive at 2.5 percent. The MSCI EAFE (developed international equities) rebounded and were up 7.4 percent. Strongest of the major equity benchmarks was the MSCI Emerging Markets index, up 11.5 percent in the quarter. 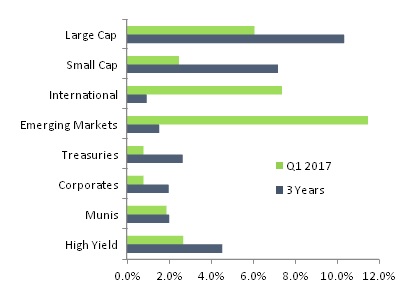 Within equity markets, the strongest performance came from the technology sector, up 12.6 percent. After technology, the best-performing sectors were consumer discretionary, health care, and consumer staples up 8.45 percent, 8.37 percent, and 6.36 percent respectively. Only two of the ten sectors were negative. Telecom was down 4 percent and energy was down 6.7 percent. Positive earnings forecasts for the year are largely dependent on growth in earnings from the energy sector. The declining price of oil and weakness in the energy sector ordinarily casts a more negative pallor over the market. 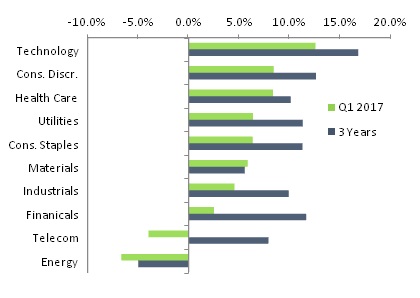 Fixed-income markets were positive despite the interest rate hike at the March meeting. Tepid but consistent economic growth, low unemployment and a slight increase in inflation compelled the Federal Reserve to raise the Fed Funds rate by a quarter of a percent to the range of ¾ to 1 percent. The statement also foreshadows future rate hikes by year-end. The small rate hike did not impact longer maturities, as the yield curve flattened. This flattening reflects a disagreement between the bond market and stock market about the likelihood of a significant economic expansion. Fixed-income markets ended the quarter just barely positive after negative returns in the end of 2016. Treasuries were up 0.8 percent. The yield on the 10-year Treasury was almost unchanged at 2.39 percent from 2.45 percent at the end of 2016. Corporate bonds were up 0.8 percent. Intermediate munis were up 1.9 percent. High-yield bonds were up 2.7 percent in the quarter.

As we look at market behavior and reaction to political environment, there are a number of factors we carefully consider. Thus far, the majority of investors appear to react favorably to political statements and promises by the Trump administration that are business-friendly. At the same time, investor reaction has been muted to setbacks in the administration’s agenda. The market rallied in early March as debate began over a bill repealing and replacing the Affordable Care Act (ACA), but was flat the week the bill died without reaching a vote. Many business-friendly tax reforms are dependent on cost savings from the rollback of the ACA. However, the lack of reaction suggests that the market still believes significant tax reform can be achieved. Likewise, with a significant portion of earnings growth expected from the energy sector, declines in the price of oil and related earnings expectations for energy companies have not yet caused a drag on the market. Many of our clients have limited direct exposure to the energy markets, but a significant shock in this sector would have repercussions across the market.

Many investors look to the bond portion of their portfolios primarily for stability and preservation of capital. Declines in this asset class can be uniquely disconcerting. In the persistently low interest rate environment of the past decade, many investors have grown frustrated by low yields and have turned to longer durations or lower credit quality (high yield, also known as “junk” bonds) to increase income from bonds. Because these bonds have greater potential to fall in value as interest rates rise or credit quality declines, understanding this risk is important.

For investors using bond funds, there is a possibility that a decline in prices of existing bonds from interest rate hikes will cause panic selling among investors. Investors using laddered bond portfolios (a series of bonds over a spread of years that are held until the bonds mature) may have more control than bond fund owners. Fluctuations may not have a real impact on the investor. As we consider the options for bond investments for our clients, we look to find the best fit for their financial and impact objectives. Where individual bonds have the benefit of allowing the investor to limit realized losses by holding bonds to maturity, individual bond portfolios are almost always less diversified than bond funds. While bonds can theoretically be traded at any time, bond trading is significantly less efficient than stock trading. Transaction expenses for small bond denominations are expensive. Remembering that the primary purpose of a bond allocation is preservation of capital, the diversification through a bond fund should be balanced with the ability to control against losses from rising interest rates. For investors who do not have a large enough bond allocation to appropriately diversify their bond holdings, bond funds are often a better choice than owning an insufficiently diversified bond portfolio.

Your Veris team knows that uncertain times are unsettling to investors. While we continue to keep abreast of possible and unpredictable impacts from policy changes, we focus on our clients’ long-term goals. Our sustainability core-values help filter short-term noise in the financial markets without losing sight of the long-term risks and opportunities.