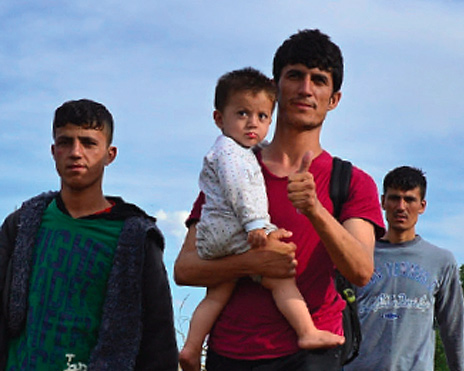 Collective Consciousness and the Refugee Crisis

Many of us are struggling with the current global refugee crisis and seeking some small way to make a difference. Ban Ki-Moon wrote an op-ed for The New York Times titled, “The refugee crisis is a test of our collective conscience.” The crisis affects all corners of the world. Refugees face a host of common issues as they seek peace and security, ranging from the trauma of the refugee journey itself, experiencing or witnessing violence, challenging humanitarian conditions in refugee camps, prejudice from host communities, a lack of self-reliance and livelihood, and even problems
arising from resettling or returning home. Should refugees successfully overcome these obstacles, they must still cope with the trauma for generations to come.

At the end of 2017, a record 68.5 million people around the world had been forced from their homes, including 25.4 million refugees, according to the United Nations refugee agency. Only 102,800, less than 1% of the total number of displaced, were admitted for resettlement in 2017. The terms refugee and refugee camp imply a temporary situation. But this is not a new crisis, and for many refugees their situations are far from temporary. Some refugees have lived their entire lives in camps. Palestine refugee camps have existed since 1948, Mae La refugee camp since 1968 and Dadaab Kenya since 1991, to name a few.

What To Do?
The situation is overwhelming and absolutely a test of our collective conscience. As global citizens, we can use our awareness, energy and philanthropy to help. The impact investor has additional options. We can question how public companies are involved in the refugee and immigration crises. Are they or their supply chains involved in forced or child labor, unfair working conditions, human rights violations, or exploitation of undocumented workers? Companies with higher governance scores are often less likely to engage in these practices.

Divesting from private prisons is another option. There are two publicly traded private prison operators, GEO and CoreCivic Inc. According to the Migration Policy Institution, as of August 2016, nearly three-quarters of the average daily US immigration detainee population was held in facilities operated by private prison companies. That’s a sharp contrast from a decade ago when the majority were held in ICE-contracted bed spaces in local jails and state prisons. The industry’s bottom line depends on incarceration for investor profit.

Investing in solutions is another option for the impact investor. Community development finance institutions (CDFIs) work in many US communities. They deliver responsible affordable lending to help low-income, low-wealth, and other disadvantaged people and communities join the economic mainstream. Investing in a CDFI certificates-of-deposit or promissory note may help refugees and immigrants build credit with low limit cards, financial literacy seminars and loans. In 2014, Grantmakers Concerned with Immigrants and Refugees published a guide of CDFIs referencing Dreamer, immigrant and refugee programs.

Other developing options are supporting public companies who make significant contributions to refugee welfare, including hiring, funding, and in-kind services. New and further developing are pay for success bonds and private investments in refugee entrepreneurs directly or through funds.

Despite the scale of the refugee challenge, we need to think of it first and foremost as a crisis of solidarity. Whether the world can come together to effectively support these vulnerable groups will be a true test of our collective conscience.