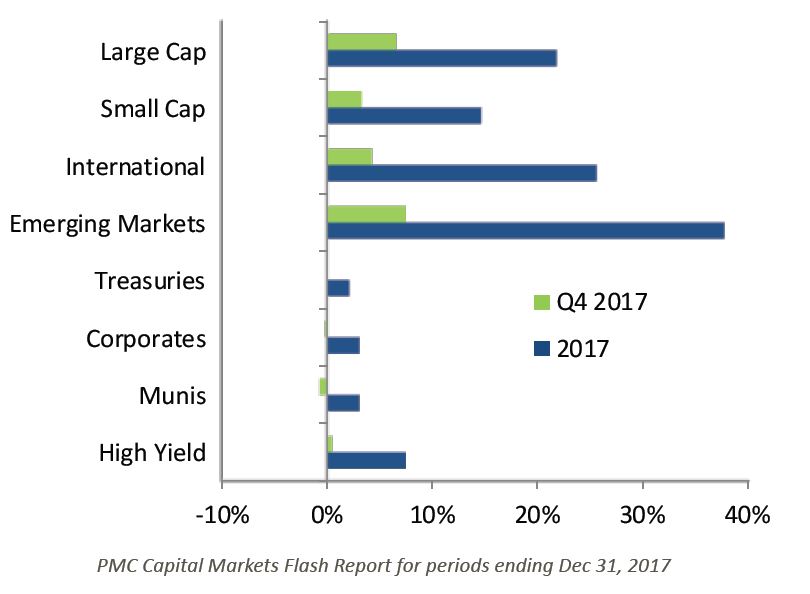 Hurricanes, fires, earthquakes, marches, market growth, a new tax plan and some unbelievable tweets – 2017 was an unforgettable year. Markets typically do not like uncertainty, but were strong through a year of swirling unpredictability. What happened and what comes next?

Within U.S. equity markets, the strongest performance came from the consumer discretionary sector, up almost 10 percent in the quarter, and 38.8 percent for the year. All sectors were positive in the quarter, led by technology, financials, materials, consumer staples, industrials, and energy stocks.  However, even with strength in the last two quarters, energy and telecom remained negative for the year. 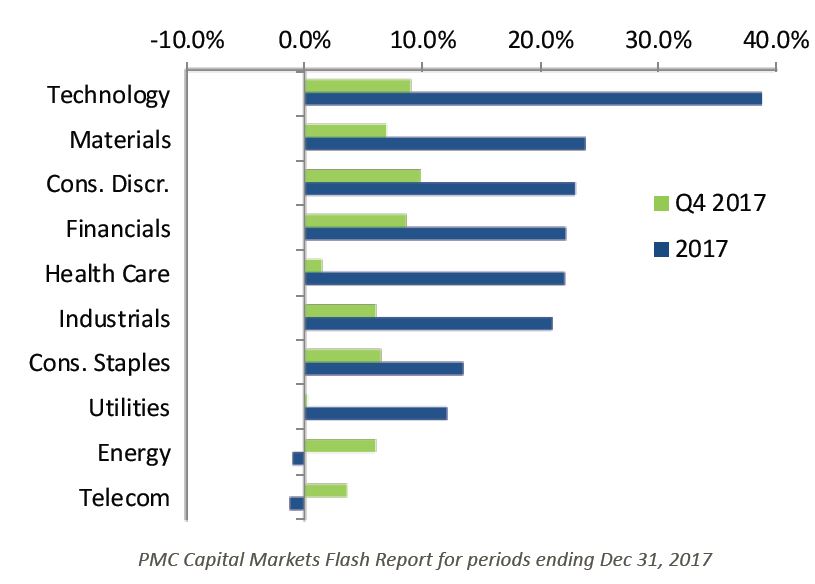 A tempered bond market is not a surprise with the rate hikes. And the rate hikes are not a surprise given the prolonged period of very low rates, near record expansion in the stock market, very low unemployment rates, and stable, sustained recovery in the economy. Less predictable is the impact significant corporate tax cuts will have on an already energized stock market and an economy that is eight years into expansion. Cuts to income taxes are likely to have a positive impact on both consumer spending and investments. Tabling for this discussion the potential positive economic impact of personal tax cuts and the regressive nature of the new tax plan, what impact might the corporate tax cuts have on the market and the economy? To understand this, we look at the stated intent of the corporate tax cuts, and how this may alter the current course of the economy.

The underlying premise of cuts to corporate tax rates has largely been the notion that reducing corporate tax rates will lead to greater investments by corporations. These investments will lead to job creation and wage growth. Perhaps corporations have been paying so much in taxes that they haven’t had enough money to invest in business expansions and wage increases. Business expansions stimulate the economy and can increase the number of jobs both in the short run (construction) and in the long run through new permanent jobs. In other words, more business spending could create more jobs, leading in turn to greater consumer spending and a robustly growing economy.

Contrasting the stock market’s growth since 2008 with that of the economy, we see two different declines, and two very different recoveries. While our GDP is up 15 percent and wages are up 24 percent from levels prior to the great recession, the S&P 500 is now 78 percent higher than it was before the market decline.  In other words, this most recent expansion has favored shareholders over wage earners by a multiple of three.

The Decline and the Recovery 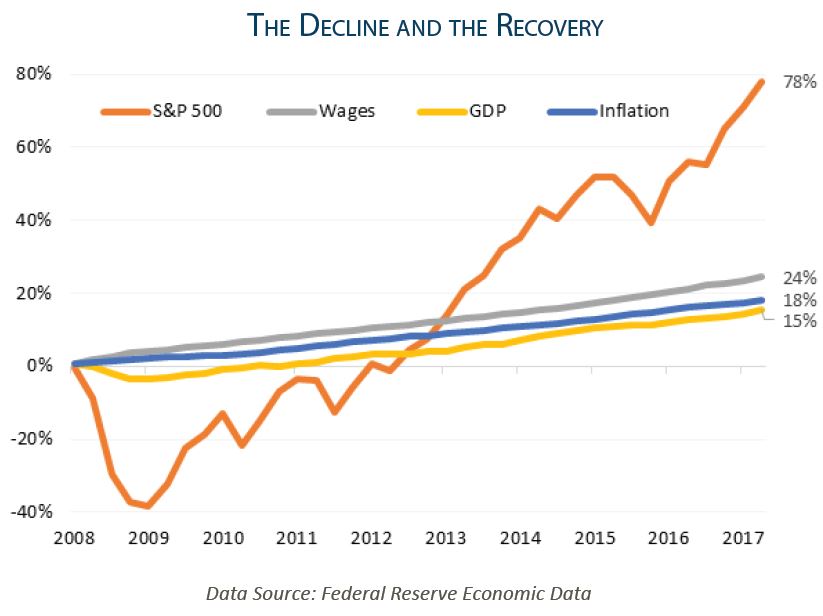 Growth of our economy is measured by the Gross Domestic Product (GDP), which breaks contributors into four broad categories: consumer spending, government spending, investment, and net exports which have been negative as we have imported more than we have exported for several decades. For as long as it has been measured, consumer spending has been the largest contributor to GDP, averaging about 67 percent and growing about 2.7 percent per year over the last twenty years. The next largest portion of GDP comes from government spending, which makes up about 19 percent of the GDP and has been growing at a rate of about 1.2 percent over the same time period. The smallest contributor to GDP over the last twenty years has been investment. Investment refers to business spending, primarily on equipment, buildings and land, and increases to inventories. In the last twenty years, this has averaged about 17 percent of the total GDP and has been growing at a rate of 2.8 percent. Finally, net imports detract an average of 3 percent from GDP and have been growing at about 4.5 percent per year. 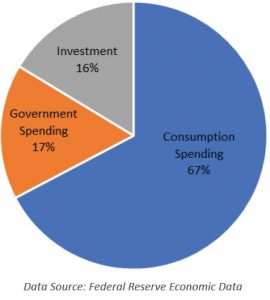 Looking at the current economic recovery, the time since the recession ended in 2009 to now, something stands out. At 2.2 percent, growth in consumer spending has tracked below its longer-term average of 2.7 percent. Government spending has decreased by an average of 0.6 percent per year rather than its typical growth rate of 1.2 percent. The detraction of net exports on GDP is in line with its long-term average. While the U.S.’s negative net exports, which detract from GDP, are increasing, it makes up such a small portion of the total GDP that this higher growth rate has a low impact on total growth. Investment has been the outlier, growing 5.3 percent per year, almost double the long-term average of 2.8 percent. If growth in investments has already been much greater than the average rate and this hasn’t led to robust enough economic growth, why not?

The answer is that the high rate of investment spending has not yet led to growth in consumer spending. Despite adding 17.6 million jobs and taking unemployment from the peak in 2009 of 10 percent to the current low of 4.1 percent, consumers have been spending at a slower than normal rate. Because consumers buy the products made by corporate investments, corporations should only invest in increased lines of productions if they believe consumers want more of what they currently sell than they can currently produce. Trends since our last recession suggest that while corporate investment has more than recovered, the consumer has not. Without growing demand from strong consumers, corporations may continue to spend tax savings on higher dividends for shareholders or through share buybacks. Both will benefit shareholders more than consumers, or the broader economy.

The cut to corporate tax rates will most likely provide a nice boost to corporate earnings by inflating the year over year earnings growth rate, which may extend the bull market’s run. While the boost to earnings will continue for as long as the corporate tax cuts remain, the earnings growth rate will only be impacted for the first year. After that point, the stock market would need to find a new source for earnings expansion. There is little room for further reductions in unemployment, so growth in consumer spending would be easier to achieve from better paid workers rather than through increasing the number of workers. Higher wages could break the stagnation in consumer spending growth, and lend support to continuation of a strong stock market and strengthening economy.

Perhaps this is why Larry Fink, CEO of BlackRock, penned an impassioned letter to the CEOs of publicly traded companies. In his letter, Fink highlighted that in addition to financial analysis, a corporation’s strategic plans “must also understand the societal impact of your business as well as the ways that broad, structural trends – from slow wage growth to rising automation to climate change – affect your potential for growth.” He critiques CEO pressure to serve shareholders by distributing a higher portion of earnings at the expense of investments in future capabilities, such as employee development, fair wages, and innovation. “Companies must benefit all of their stakeholders, including shareholders, employees, customers, and the communities in which they operate.”

There is hope. In addition to thousands of bonuses announced after the tax plan passed, many of the largest employers, including Walmart and Starbucks, have announced increases to wages for their lowest paid workers. If we see a continuation of these types of increases, and additional increases bringing the lowest paid workers closer to a living wage, we could finally see a growth in consumer well-being and spending. Additionally, several companies have announced plans to add jobs in the US which could help the average annual jobs added number maintain or even exceed the annual rate of 2.2 million new jobs from the last eight years. Continuing job growth and increasing wages could provide a more stable base to our growing economy.

Key in the Veris investment philosophy is our belief that companies integrating environmental, social, and governance factors into their business practices are better positioned competitively and that the attention paid to these criteria can help mitigate risk. Reductions to government regulation of worker safety and environmental quality, along with wage stagnation that has coincided with a decline in union membership and clout, leaves both the environment and the economy in a precarious position. Both may be sustained by business practices that take a mindful approach, incorporating the societal impact of business into the business strategy, considering the long term rather than narrowly focusing just on the next quarter’s earnings.

While we grow investment strategies that meet our financial and impact criteria, we also are considering the ways in which changes to personal taxes impact both our clients and the investment strategies we deploy in your portfolio. With the magnitude of changes, many of our clients will benefit from a coordinated meeting between your wealth manager, tax planner, and estate planning attorney. If you have questions about how recent tax changes will affect you or your investments, we are here to start the discussion with you.