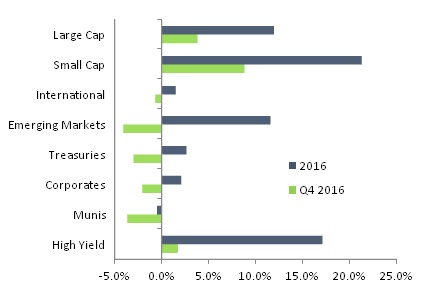 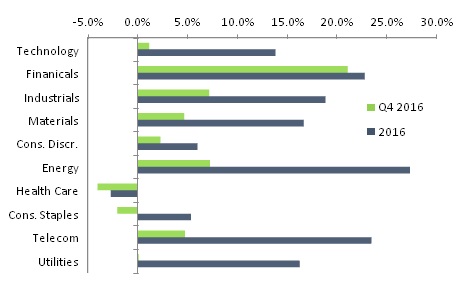 With a new administration now in place, we look at each sector to understand how markets may be affected by both political and economic forces. The energy sector, heavily impacted by oil-related businesses, is an instructive place to start.

The significant rebound in energy stocks last year happened despite dramatic a year-over-year decline in the sector’s earnings (currently estimated at -66%). Because stock prices tend to express expectations of future earnings, the rise in stock prices is a reflection of the expected significant increase in earnings for companies in the energy sector. The chart below shows current earnings growth forecasts for each sector over the next two calendar years. The estimates for extraordinary forecasted growth in earnings within the energy sector stand out. They are expected to exceed 350 percent. In fact, the forecasted earnings growth has little to do with potential policy or regulation changes under the Trump presidency. The 2017 forecast has changed very little from its pre-election forecast from September 30, 2016.

The anticipated increase in oil stock earnings is instead tied to the expectation that oil will to rise to about $56 by the third quarter of 2017 from a low of $33.69 in the first quarter of 2016. This forecasted increase is expected to boost energy sector earnings from $4.3 billion in the third quarter of 2016 to $14.0 billion in the third quarter of 2017. The price of energy stocks today factor in these expectations. Changes to these expectations, either positive or negative surprises, could further impact the returns of energy stocks. It is important to note that while the current value of energy stocks appears very positive that: 1) globally the majority of new electric generating capacity is solar and 2) grid parity prices for solar and wind are now below fossil fuels throughout Developing world and will at parity in the U.S. over the next 5 years.  Finally Bloomberg’s analysis tags 2020 as the year oil consumption peaks globally.  These are amazing transformations that are not turning back. 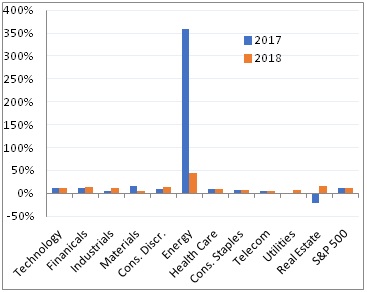 Oil Prices vs. Strength of Dollar 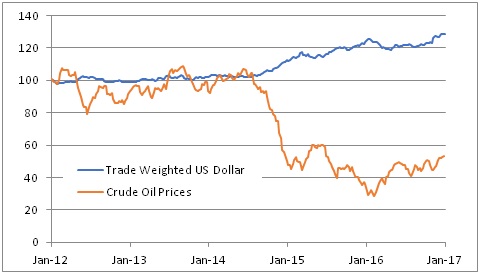 Another key factor affecting oil prices is supply and demand. Some of price declines in recent years can be attributed to the high supply coinciding with decreases in demand for oil. Supply has been high because OPEC has maintained elevated production levels. Natural gas and energy from renewable resources have taken share of total demand away from both oil (petroleum) and coal. Expectations for oil prices to increase this year rest heavily on assumptions of a weakening dollar and a decrease in OPEC production. 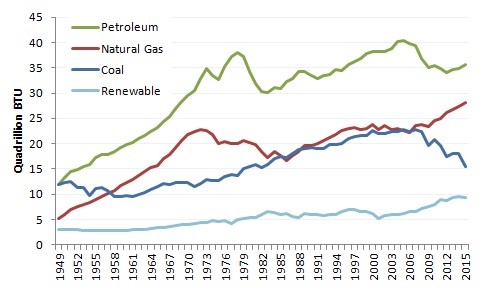 The impact of tax incentives proposed by the new administration and Congress are uncertain at best. This may not change the business case for renewable. As oil gets more expensive, the interest in sourcing energy from natural gas and renewable energy would be expected to rise. When oil is relatively cheap, as it has been, tax incentives have helped make the financial case for investment in renewable. Moreover, 365 U.S. companies made urged the president-elect to continue participation in the Paris climate deal, citing the business and job creation aspects of climate protection economies. While short-term returns may be volatile and unpredictable for the next few years, there remains a long-term business case for ongoing investments in renewables.

As we look to the broader economy, Veris’ areas of thematic impact focus, and at vulnerable communities, we see important roles for city and state governments, impact investing and philanthropy. Cities and states continue to lead in raising the bar in areas ranging from increasing the minimum wage to addressing climate change. Shareholder advocacy and active investing can replace some of what may be lost by decreased government regulation. Investment in sustainable businesses can address climate change and building healthy communities. With many non-profits relying on government grants for significant portions of their annual budgets, increased reliance on philanthropy is expected. Clearly in this transition in Washington we see the importance of redoubling the effectiveness of impact investing strategies. And we need to remember that for the last 20 years we have collectively been changing the face of business and finance for the better. Impact investing plays an ever bigger role.  We appreciate our opportunity to engage in this work with each of you.